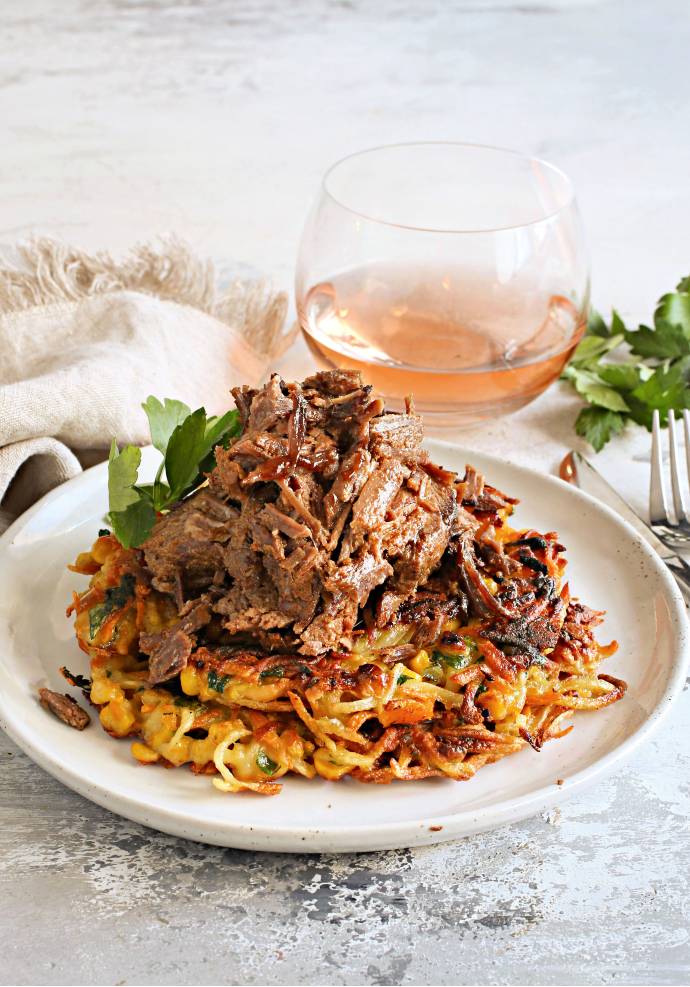 I know that many of you grew up in places where brisket came off a smoker with meltingly tender meat and that characteristic smoke ring at the top. But I grew up with brisket that was cooked in an oven, submerged in beef stock and red wine, accompanied by herbs, onions and carrots. That came out meltingly tender as well and you also got gravy.
Living in a a big city apartment, as I do, I assumed the latter brisket was my only option except for dining out at southern cuisine restaurants. My friends at the New York Beef Council informed me that I was wrong. They explained the process of getting that smoked brisket flavor in my very own oven, in my tiny New York City kitchen. 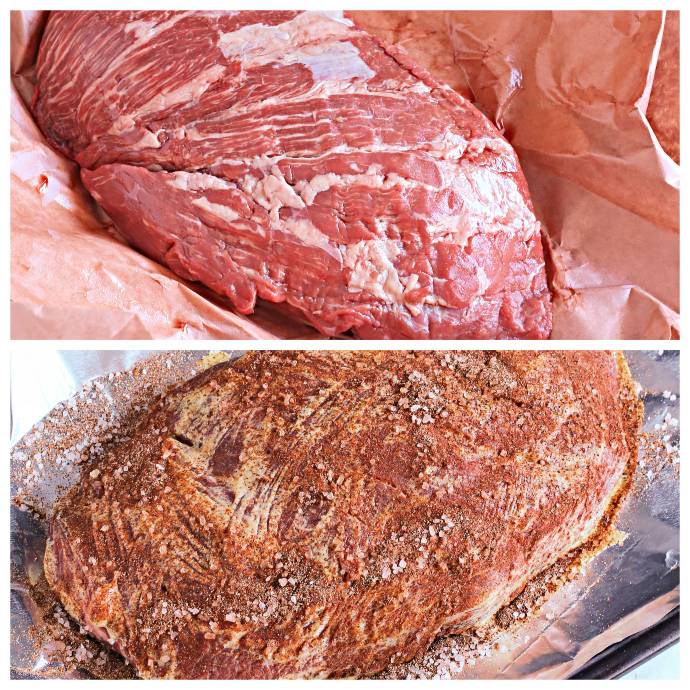 I'll admit, I was doubtful. I expected to end up with something dry and missing that good brisket flavor that I was used to. I even bought a smaller cut than I normally would because it seemed risky to, well, risk, a good brisket. But I really should know better than to question the masters of beef because I know them well enough at this point. We've worked together for a number of years and they are the reason I went from cooking a good steak to cooking a great steak.

When I tried the recipe, I temporarily put away my doubts and followed their instructions about seasoning, wrapping tightly and letting it sit in the fridge overnight. I dutifully took it out the next morning, put it on a sheet pan to catch any drips and placed it in a too-low oven. It was too easy. This couldn't be. But, I closed the oven door and walked away. 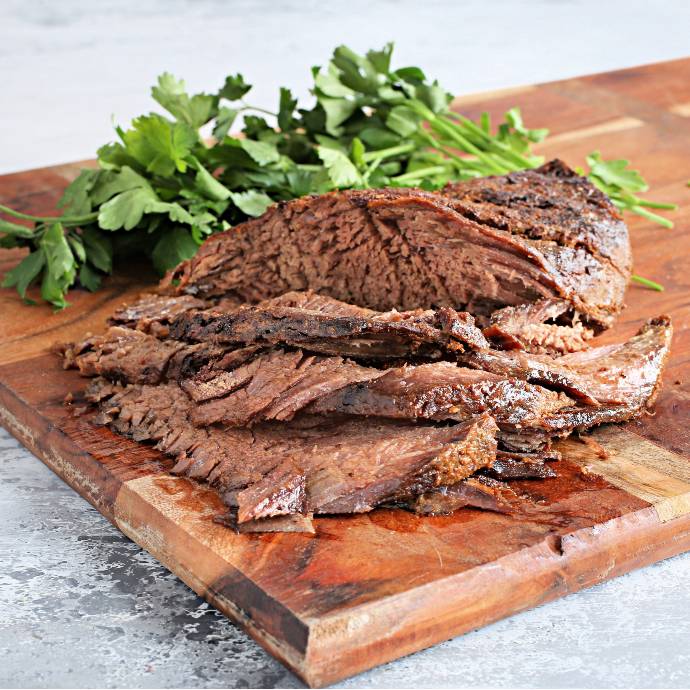 Thanks to a lesson the New York Beef Council taught me long ago, I didn't rely on any guesswork. I had my thermometer at the ready and pulled the brisket when the temperature reached 190. I peaked to see if it needed any extra unwrapped browning time but it was a beautiful shade of brown. So I left it wrapped to sit and do it's carry-over cooking and, finally, cooling.

I approached it with a sharp knife, half expecting to have to saw through it. Pfft. It practically falls apart when you look at it. And the flavor is amazing! Not only that but it is seasoned through and through, unlike the wet version which sometimes needs a little more salt in the middle. 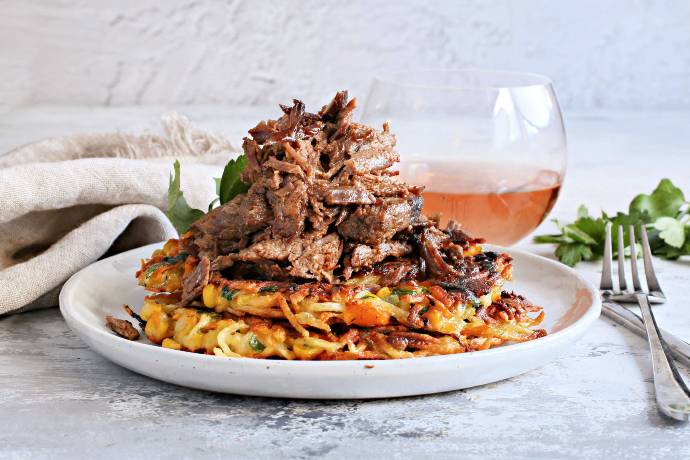 I'm lucky there was enough left for photos based on the way I attacked it. I deeply regret not buying a brisket twice as big. And, apologies to any friends and family expecting my normal brisket recipe this holiday season because it ain't happening. You're getting this. And you're going to thank me.

Since I didn't end up with my usual vat of gravy (although I certainly could make a pan gravy), I skipped the mashed potatoes and made autumn veggie fritters instead. The natural sweetness of the corn and butternut squash in the fritters went so well with the smoky flavor of the brisket. Enjoy!

This recipe is sponsored by the New York Beef Council. Thank you for supporting the products I love and use in my kitchen. 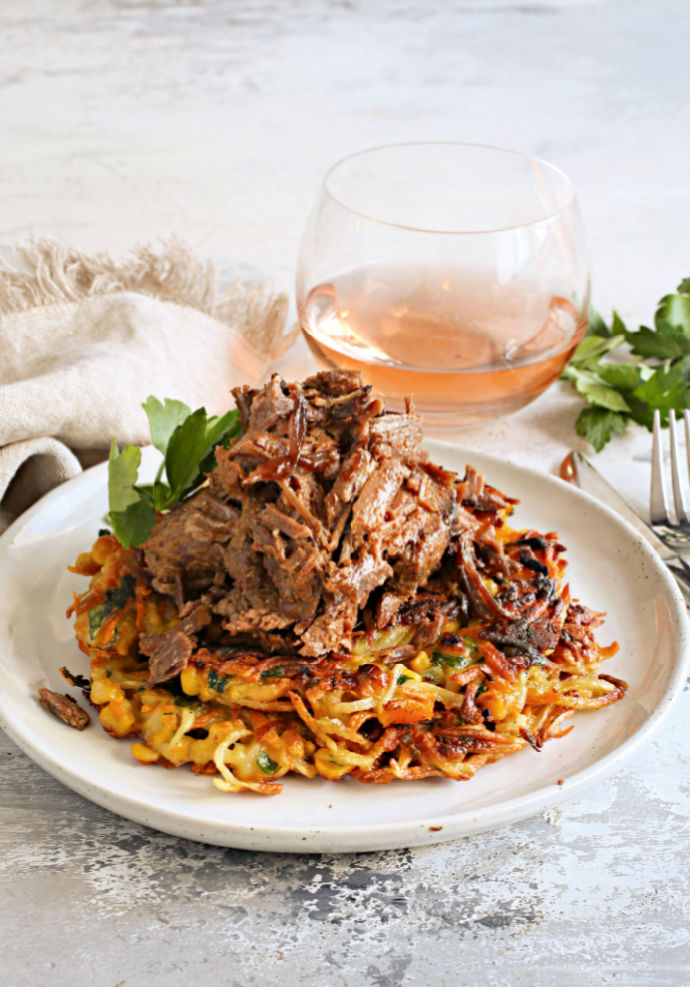 For the Smoked Brisket: *
For the Vegetable Fritters: