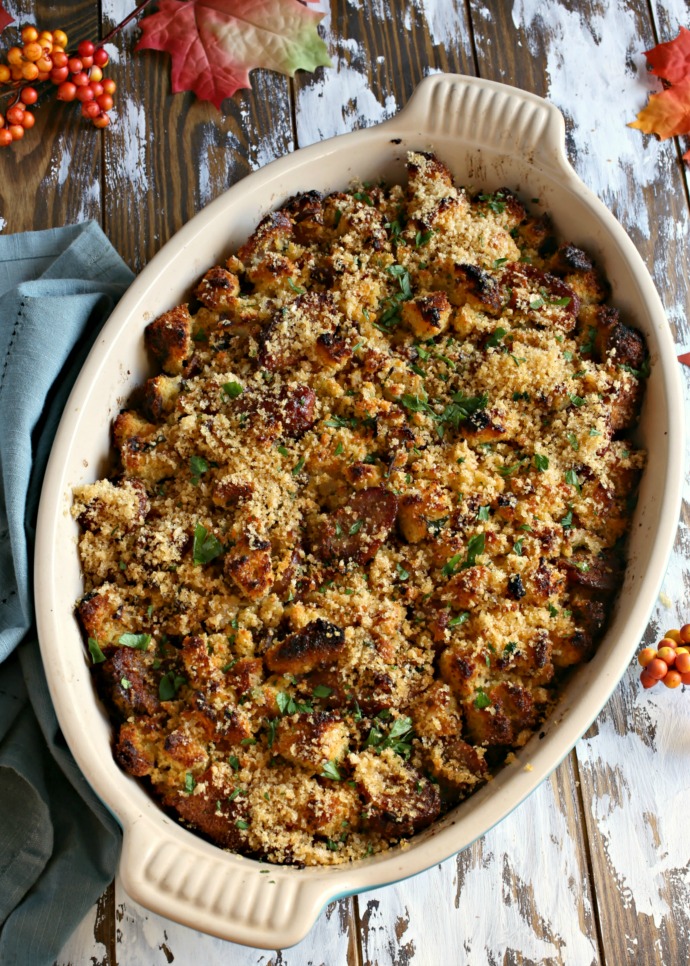 Let's talk about the best part of the Thanksgiving feast: stuffing! Or, in this case, dressing. Because when you stuff it inside the bird it's called stuffing and when you make it on the side it's called dressing. In my family we call it stuffing no matter what because dressing is the stuff you pour on salad. But that's not important right now. What is important is: stuffing! 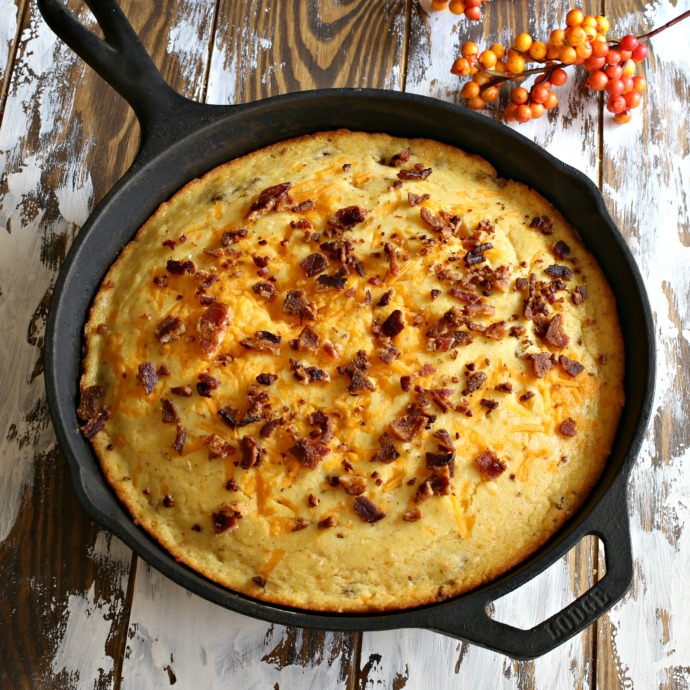 I'm going to call this one a pork lover's dish because there's bacon in the cornbread and sausage in the dish and the whole thing is topped with bacon panko. Wait. What? Yup, there is bacon panko. 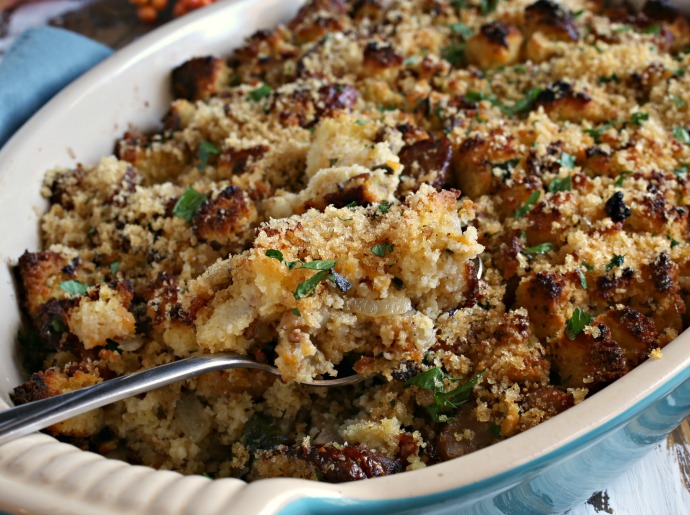 What happened was that a nice company called Bacon's Heir, that makes fried pork rinds, decided to crush them up and sell them as a pork alternative to bread crumb topping. It's great if you want to avoid bread which I am clearly not doing. But it's equally great if you just want pork breadcrumbs and, really, why wouldn't you? 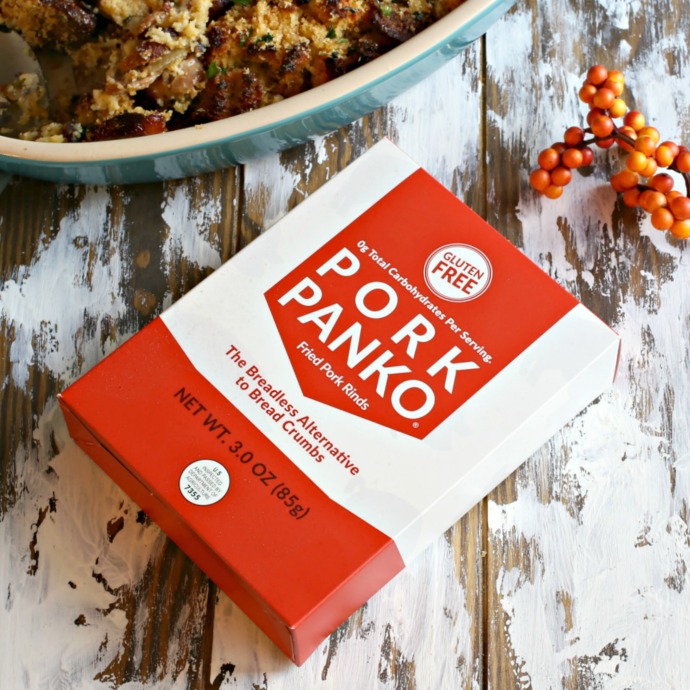 I also included some of the bacon panko inside my cheesy bacon cornbread and the result was both a great texture and a great boost of flavor. I recommend making two of these skillet cornbreads so that you can use one for the stuffing and serve the other on the side during the meal, or for breakfast the next day, because it's seriously good.

The rest of the stuffing included such holiday deliciousness as onion, sage, sausage, butter and chicken stock plus a non traditional pork panko crust. Maybe you should make two of these as well. Enjoy! 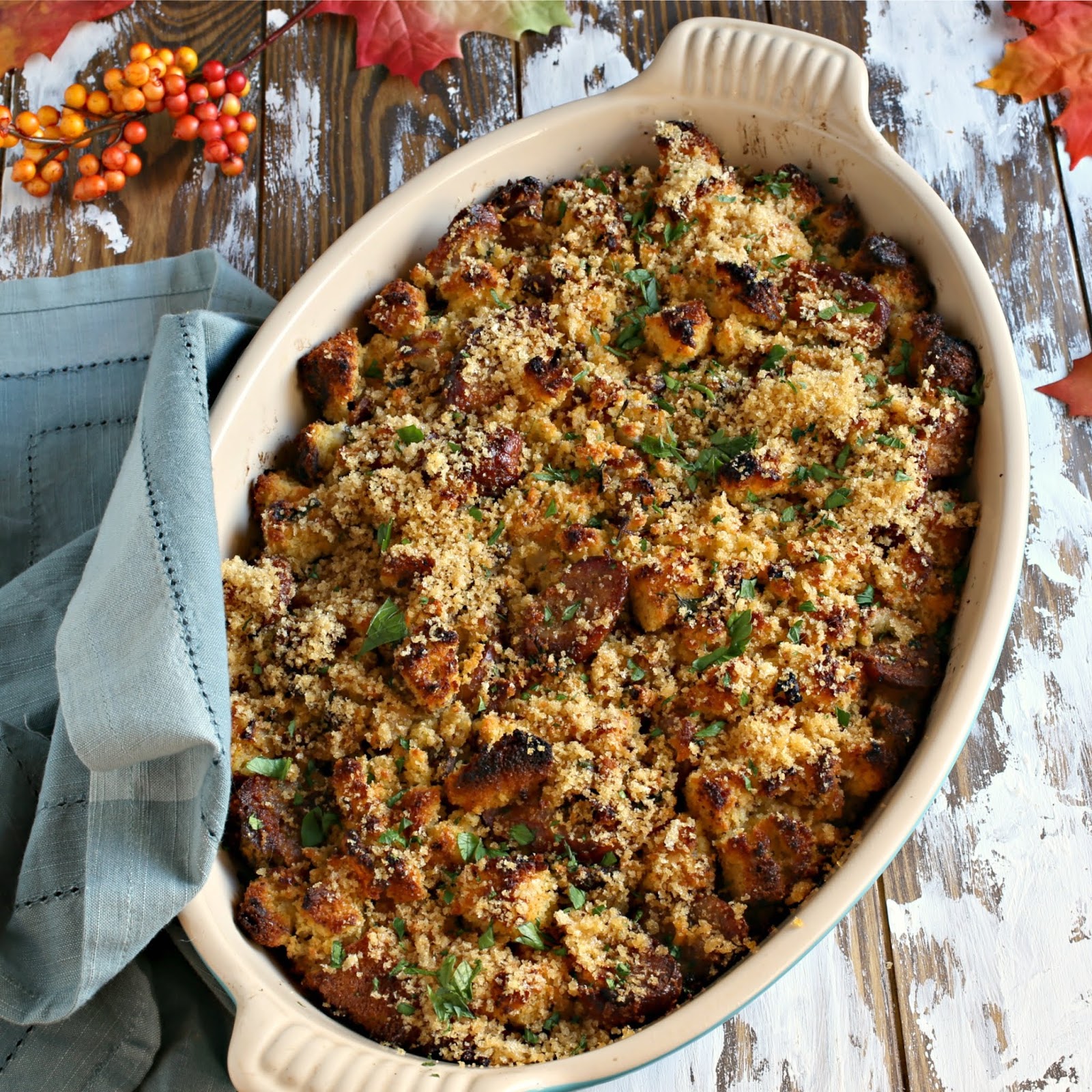 Cook the bacon in a large cast iron pan until crispy. Place the cooked bacon on a paper towel lined plate and pour out all but 1 tablespoon of the bacon fat from the pan.

In a separate bowl, whisk together the egg, buttermilk and melted butter.

Pour the wet ingredients into the dry and stir until combined. Crumble the bacon and stir it in along with the cheese.

Pour the batter into the cast iron pan and bake in the oven for 25 - 30 minutes. Remove from the oven (but leave it on) and allow to cool before slicing into cubes.

Heat the olive oil in a large skillet and add the diced onion. Cook on medium heat for a few minutes until it become translucent.

Stir in the garlic, sage and parsley and continue cooking for an additional minute.

Stir in the cooked and sliced sausage.

Heat the chicken stock and butter in a pot.

In a large bowl, toss together the onion mixture and the cubed cornbread. Pour into a large casserole dish and pour the warm chicken stock over it. Top with the pork panko and bake for 20 minutes or until the topping begins to brown.
Created using The Recipes Generator
This recipe is sponsored by Bacon's Heir. Thank you for supporting the products I love and use in my kitchen.