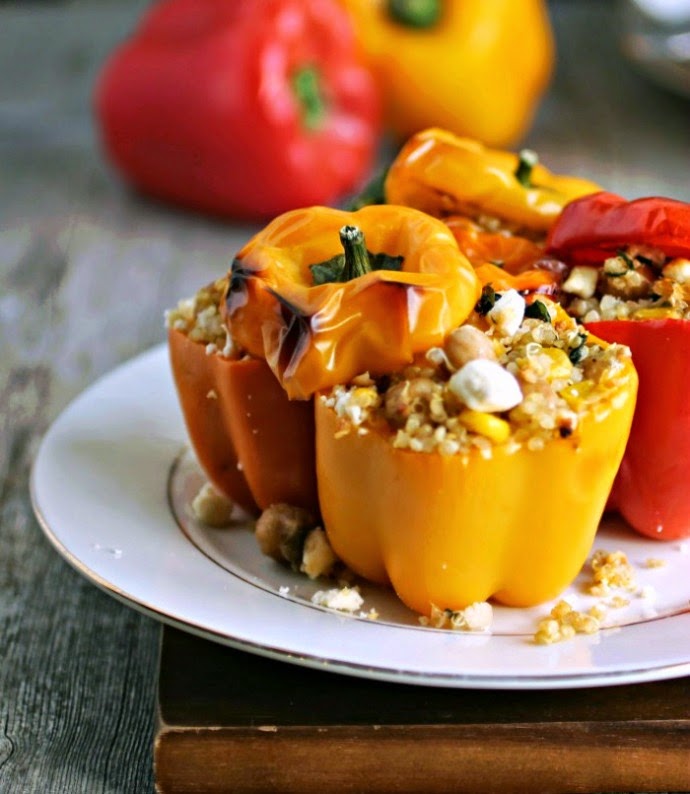 Last week when I stopped by our local fruit cart (is this a Manhattan thing?), I saw that they had bags of colorful baby bell peppers.  They looked so good and I was tempted but I already had some holiday menus planned and knew I wouldn't have a chance to use them.  So I passed but now my head was full of potential pepper recipe ideas.  Happily, I came home the other day to a delivery from Baloian Farms containing those very same colorful baby bells. 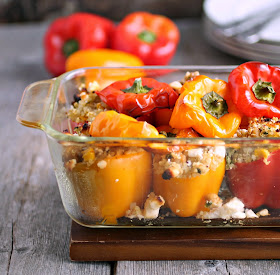 I will be working with Baloian on a project later this month and so they were nice enough to send me two bags.  I like the big peppers just fine but there's something about the baby bells that's too cute.  So much so that I didn't really want to slice them up.  Well, if I don't want to slice them, that means I need to stuff them.  There are so many potential stuffing ideas but I had a taste for Quinoa and was in the mood for some Greek inspired flavors.  I added some chickpeas to give it more protein and I had a great lunch, side dish or even veggie dinner.  Cheers! 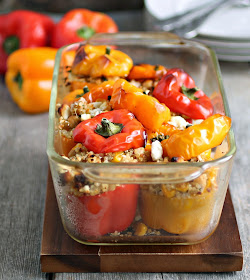 Slice the tops off the peppers and empty out the seeds and veins.  Retain the tops.  Place the peppers in a baking dish that will support them (I used a standard loaf pan here).

Rinse the quinoa and add to a pot along with the 3/4 cup of water.  Bring to a boil, cover, reduce the heat to low and cook for 12 minutes.  Turn off the heat and let sit, covered, for an additional 5 minutes.  Stir in 1 tablespoon of the olive oil and the parsley.

While the quinoa is cooking, add the second tablespoon of olive oil to a large pan or skillet along with the onion.  Saute on medium heat until the onions are translucent.  Add the garlic, chickpeas and corn.  Continue to cook for about 10 minutes.  Add the onion mixture to the quinoa and fold in 3/4 of the cheese and the oregano.  Season with salt and pepper.

Add as much of the mixture into each pepper as it will hold and sprinkle on the remaining cheese.  Replace the pepper tops, loosely, and bake in a 375 degree oven for about 30 minutes or until the peppers are tender and have a bit of color.  Makes approximately 4 servings.