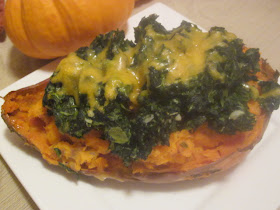 I hadn't thought much about sweet potatoes all summer but the combination of cooler weather, and a colleague's semi- obsession with them, influenced me to pick up a couple of plump ones in the market. The colleague in question had stuffed hers with broccoli, which sounded good, and fat free cottage cheese, which sounded less appealing. But I was certainly inspired to stuff! I chose spinach instead of broccoli because of the creamier texture. Cheese, of course, although I went with cheddar. And I did keep it low fat because there's no sense in ruining the nutritional powerhouse of the mighty sweet potato with gobs of cholesterol. 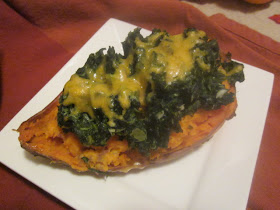 The high fiber of the sweet spud and the spinach certainly made this stuffed potato a filling meal in itself. But, somehow, it felt like something more was needed to call it that. Hamburger, perhaps? Yes, that would be delicious, if a bit like a shepherd's pie. But maybe something with a little more kick would be interesting. Crispy bacon would work. So could sausage! So I cooked up one link of Italian sausage, chopped it into small pieces and mixed it in with the potato. Now it was a meal! A really good meal. Enjoy!
Ingredients:
Ingredients
1 Large sweet potato
1 Tablespoon low-fat cream cheese
1 Tablespoon low-fat butter
1 Tablespoon low-fat sour cream
1 Link Italian sausage (sweet or spicy) or 2 slices of thick cut bacon
2 Scallions, chopped
Large handful of fresh spinach or half a package of frozen spinach
1 Clove garlic, minced
1 Tablespoon olive oil
2 oz. Cheddar cheese, shredded
Salt and pepper to taste

Wash and pat dry the sweet potato with the skin on. Wrap in aluminum foil and roast in a 400 degree oven until tender. While the potato is cooking, lightly saute the garlic in a pan with the olive oil and add the spinach. Cook until wilted and set aside. In a separate pan, cook the sausage or bacon until crispy, slice into small pieces and set aside.

When the potato is tender, remove from the oven and let cool just enough to be able to handle. Slice the potato almost in half and scoop out most of the flesh from both halves. In a bowl, combine the flesh with the cream cheese, light butter, sour cream and scallions. Season to taste. Scoop the mixture equally into both halves of the potato skins and place in a baking dish or sheet pan. Scoop some of the spinach mixture onto each half and top both halves with the cheddar cheese. Return to the oven for about 10 minutes until the whole thing has heated through and the cheese has melted. Makes 1 -2 servings.