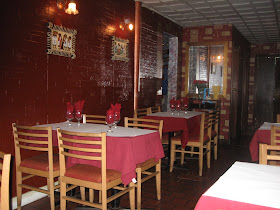 Neither Brian nor I had ever eaten Ethiopian food before. The opportunity hadn't presented itself and we didn't seek it out. But there does happen to be a little Ethiopian restaurant, appropriately named 'The Ethiopian Restaurant' about 5 blocks from our apartment. We'd passed it dozens of times, usually on our way back from taking our pup to the river promenade, and when we were almost certainly headed to our favorite outdoor cafe to eat.

But on this particular Sunday, we noticed a giant blue letter A in their window. The health department had recently mandated that food establishments display their letter grades and we were struck by the A. I will say that, since then, we've seen a suspicious amount of A's all over the city and there's some debate about their authenticity. But we were innocent of these thoughts as we admired the Ethiopian A. We both agreed that any restaurant that worked hard enough to get that grade deserved a try. We looked at the menu in the window, determined that the exotic dishes contained ingredients we either liked or were willing to try and settled that we would eat here. We dropped the pup off at the apartment and came back for a late lunch. 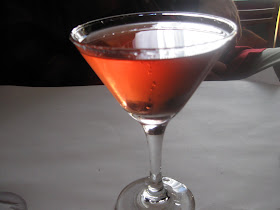 The restaurant was empty save for one family eating at a front table and there was no one to greet us. But, we were kind of excited to try a new cuisine so we waited around for the lone woman (owner? hostess? waitress?) to direct us to a table and give us menus. 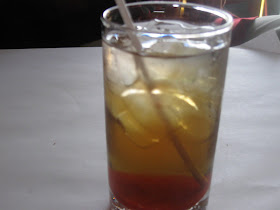 There was a cocktail list so we ordered a couple of interesting sounding ones and settled in to examine the exotic menu options. We chose to start with the Timatim Fitfit which is a salad of tomatoes, onions and avocado on Injera, an Ethiopian flat bread. We also had an order of Sambussa which are spiced lentil patties in lightly crusted pastry dough shells and served with a spicy dipping sauce. 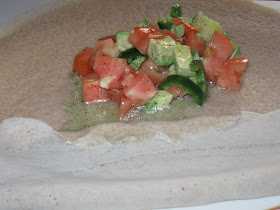 For our entrees, Brian chose the Derek Tibs, pan fried crispy lamb chunks with onions, peppers and Ethiopian spices. I was more enamored of their vegetable options and decided to order the Vege Delight which was a sampler of dishes including Shiro (an Ethiopian hummus with red pepper sauce), Misr Wot (spicy stewed lentils), Yater Kik Alecha (split peas with garlic, ginger and turmeric), Yabesha Gomen (collard greens with pepper and garlic), Fossolia (string beans and carrots with onion, garlic and Ethiopian seasonings) and Tikel Gomen (cabbage, carrots and potatoes cooked with Ethiopian spices). 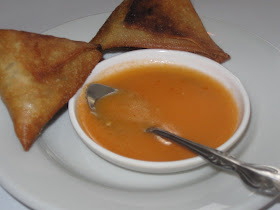 Since everything I'd ordered was technically vegetarian, the woman asked me if I ate meat and I told her that I did. I didn't understand the purpose of her question, though, until our food arrived and I saw that she'd put both our orders on one platter atop the Injera bread. That was unexpected but sort of fun and convenient since we planned to share anyway. 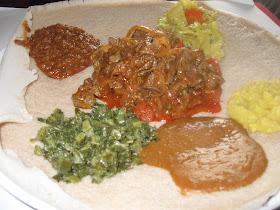 The Injera bread itself was thin with a spongy texture which Brian liked more than I did. The lamb was well flavored but quite tough and would have done better to be cooked slowly. But all the vegetable dishes were very good, well seasoned and mildly spicy.

The service, though, left a lot to be desired. The food was very slow to arrive, particularly since the place was nearly deserted and the cocktails didn't show up until after the entrees. When we were ready to leave, the woman (and the check) were nowhere to be found and we had to go into the kitchen to inquire after her. We were told she'd stepped out for a while!

We were feeling like pretty good sports that day since this was a bit of a culinary adventure. Normally we'd never remain to endure such bad service and we'll certainly not return to this place. But, we liked enough of the new flavors we tasted to say that we'll be on the lookout for a better Ethiopian place to dine.