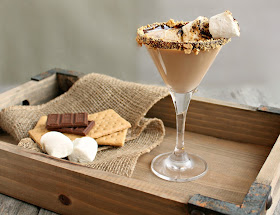 The hungry couple will be heading out soon for an extended holiday weekend of grilling and chilling.  We've been having a lot of weather lately so fingers crossed for lots of sun.  Before we leave, though, we wanted to present you with this very adult version of a summer picnic classic. 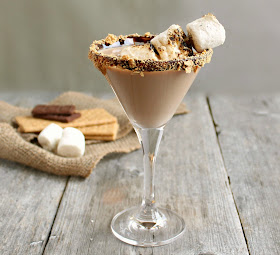 Did you even know that they make marshmallow vodka?  I sure didn't until I saw a few mini bottles of it lying on the dining room table.  And how would they get there, you may well ask!  There's a big liquor depot in Connecticut, near one of Brian's clients, and they apparently sell tons of different mini bottles for $1.00 each.  Brian stops in there on his way home and goes browsing through the minis.  Once home, he empties it all out on the dining room table, obviously in the belief that the bottle fairy will come and put everything in place.

So, the bottle fairy was checking out the new minis and stopped in her tracks when she saw marshmallow.  There's only one thing I want to do with marshmallow vodka.  OK, maybe two things because it actually tasted really good just being swigged from the bottle.  But I restrained myself because there was a liquid s'more in my immediate future. 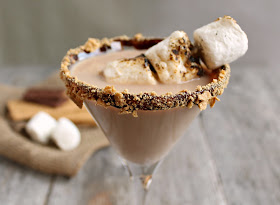 I played around a bit with the ingredients but it was actually pretty easy to replicate the taste of the dessert.  And, I even had some marshmallows in the house which saved me a trip to the store because those were the only possible garnish for the glass.  I really should put a warning sticker on this, though, because it goes down way, way too easily.  Cheers! 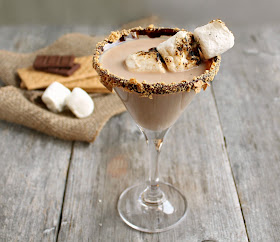 Crush the graham cracker into a shallow bowl using your hands.  It's OK if there are some chunkier pieces.  Place the chocolate into a second shallow bowl and microwave for a few seconds until melted.  Dip the rim of a martini glass into the chocolate and then into the graham cracker pieces.  Refrigerate for a few minutes to set.  Add the marshmallow vodka, chocolate liqueur, creme de cacao and cream to a cocktail shaker.  Fill with ice, shake well and pour into the prepared glass.  Spear the marshmallows on the end of a skewer or long fork and hold over an open flame for a couple of seconds until the ends get toasted.  Thread them onto a cocktail pick and garnish the drink.