Sure, we're focusing on lighter, healthier eating this month but that doesn't mean there's nothing sweet. I need something sweet. No, really. Even the most delicious dinner will disappoint me if there's no dessert. Fortunately, Santa ticked a couple of items off my holiday kitchen wish list and one of them was a mini doughnut pan. Actually, I got both the regular and mini pans so there will be all kinds of doughnuts in our future. 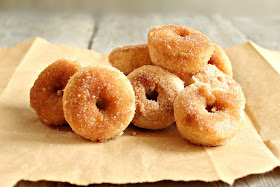 The advantage of the pans, of course, is that they allow the doughnuts to be baked and not fried. And the recipe itself contains surprisingly little fat. I'm not saying that eating the whole batch is exactly good for your figure but a couple of minis with a cup of tea or a glass of milk really hit the spot for less than 200 calories. I looked up all sorts of baked doughnut recipes and they're all a little different so I borrowed bits of each and made a couple of test batches.

They came out so cute. Tasty little bites of cinnamon sugar goodness. I really did only eat a couple but Brian demonstrated how delicious they were by finishing off the rest. And now I'm excited to try different flavors and glazes. Lemon, chocolate, pumpkin, ginger...there's going to be a lot of doughnut baking going on here. Enjoy! 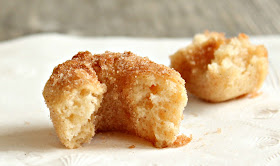 In a bowl, mix together the flour, sugar, baking powder, cinnamon and salt. In a separate bowl, whisk together the vanilla, egg, melted butter and buttermilk. Add the dry ingredients into the wet and mix until thoroughly combined.

Spray a mini doughnut pan with non-stick cooking spray and fill each cavity about 2/3 full. Note that if you fill them more, the doughnuts will rise above the pan and look more like mini muffins than doughnuts. Bake in a pre-heated 350 degree oven for 10 - 11 minutes. The doughnuts will not be very brown but they should be springy to the touch. Allow them to cool in the pan for about 5 minutes before turning them out.

While they're baking, combine the 1/4 cup of sugar with the tablespoon of cinnamon in a bowl and have the 2 tablespoons of melted butter ready in another bowl. Quickly dip each doughnut into the butter and then roll them around in the cinnamon sugar mixture. This recipe makes 24 mini doughnuts. I have a 12 cavity pan so I made them in two batches.