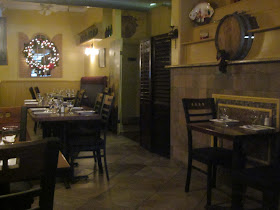 Last Sunday, Brian and I drove to his mother's house in Queens to take her out to lunch.  There aren't a lot of options near her home but she'd found this place a few months back.  We hadn't made reservations so, given that Sunday post-church lunch places tend to be crowded, we were prepared for a wait.  But, we walked into an almost empty restaurant.  Hmm...

The place is pretty although quite small.  But, since we had it mostly to ourselves, we were shown to a comfortable table.  They don't have a full liquor license and only serve beer and wine.  That's not really a problem at lunch and, actually, Brian did find a lovely red that he quite liked. 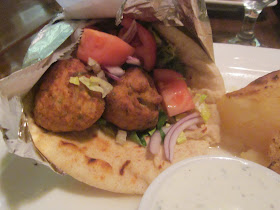 A rather flustered looking waiter presented us with menus that featured selections of Greek, Mediterranean and middle-eastern cuisines and quite a lot of it was tempting.  We placed our orders but, a few minutes later, the flustered waiter returned to clarify what we wanted.  Since we were nearly the only customers, it didn't make a very good impression.

Tasty Greek salads arrived along with a basket of warm pita bread and a tzatziki dipping sauce.  We actually found the traditional yogurt and cucumber dip to be quite thin and far from the best example of it we'd tasted but it was still a nice change from butter or olive oil.  When entrees arrived, however, the order was wrong.  Brian's mother had chosen a brunch omelet which she liked.  I'd ordered the falafel platter and Brian ordered lamb.  But, instead, both he and I received falafel platters.  The waiter apologized and offered to have the kitchen make the correct dish but the entrees had been rather slow to arrive and Brian chose not to wait and eat the falafel instead.  It was actually delicious, served with pita, cucumber and tomato salad, more tzatziki (although tahini would have been more appropriate) and lemon potatoes.  Neither of us actually cared for the potatoes but the rest was quite tasty. 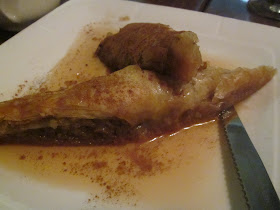 The manager/ owner stopped by our table to apologize for the mishap and the waiter returned with an extremely tempting dessert cart.  Brian's mother had the Greek custard pie which she adored.  Brian and I shared an order of baklava which was also delectable and the portion generous enough to share.  However, more errors arrived along with the check.  We were charged for three glasses of wine when we'd only had two.  And, to add insult to injury, Brian was charged for the more expensive lamb dish rather than the falafel he'd settled for.  Again, the manager returned to our table to apologize, correct the bill and mumble something about computer problems.

So, it comes down to this.   The food was good, the service lousy and the management, in our opinion, inept.  If I owned a restaurant, particularly one that was nearly empty at a time when others are full, I would do all I could to please my customers.  Not only does that waiter need much more training but, so does the manager.  Had she offered a complimentary glass of wine to make up for the entree mix-up, rather than charge us for an extra glass we didn't have, we would have been more quick to forgive the incorrect order.  Had she offered a complimentary dessert rather than an incorrect bill, it would have left a much sweeter taste in our mouths about returning.  We paid and left, shaking our heads in wonder.