A Tired Cook with a Sweet Tooth...in a Jar 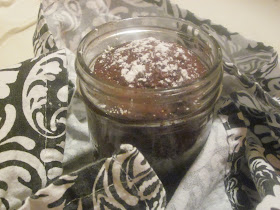 It was near the end of my first week at a new job and I was exhausted. It's so stressful to be the new kid, even when you're senior, and by now I had a headache, a backache and I seemed to have pulled something in my knee. I was a train wreck pushing a cart down the aisle of the supermarket to buy some staples and decide what to eat for dinner - grilled cheese and canned soup, as it turned out. But I also felt like something baked and sweet and I was too tired to walk to the bakery.

I usually dislike the pre-made cake mixes but sometimes the brownie mixes are OK. Brian is a big brownie fan and he's been known to come home with a box here and there and now a box was coming home with me. Back in my kitchen was a nice set of Ball jars, freshly washed and sitting around not doing anything useful. And I've been wanting to try a cake in a jar since I always think it looks so adorable when I see one. I'm sure Brian will think I'm insane. 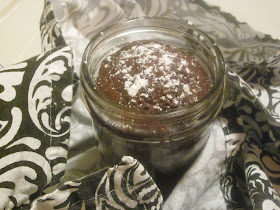 The jar brownies came out surprisingly good that night although they still had a slight box mix taste. So, over the weekend, I mixed up my own batter for a gooey pudding-like cake and baked up a fresh batch of jars for Brian (who, amazingly, thought the jar idea was cute). It's not much harder than opening a box and you get an adorable individual portion jar of chocolaty goodness...extra yummy with a little dollop of vanilla ice cream or powdered sugar on top. Enjoy!

In a bowl, stir together the flour, sugar, cocoa, baking powder and salt. Add the milk, melted butter and vanilla and stir until smooth. Divide the batter evenly between four 8 oz. jars and bake in a pre-heated 350 degree oven for 20 minutes. Remove from the oven and allow to cool slightly so the jars can be handled but the cakes are still warm. Makes 4 servings.