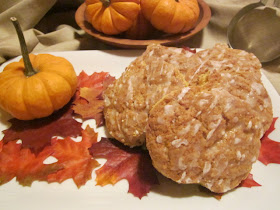 I love how these pumpkin shaped scones turned out. But... truthfully, that wasn't exactly what I set out to do. Over the weekend I'd planned to bake a batch of pumpkin flavored scones - just basic scones with a little glaze on top. But somehow the dough was just too loose and there was no way to pat it out and shape it. 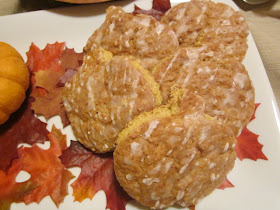 I nearly chucked the whole batch but instead decided that it might still taste good. So, I just spooned them free-form onto a baking sheet, figuring I wouldn't serve them to anyone but Brian and I could still nibble on whatever came out. 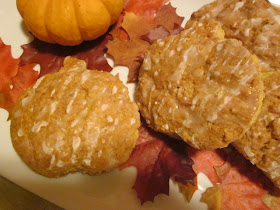 In the oven the dough spread and now I had a bunch of free-form scones turning into one humongous scone. Pumpkin scone flat bread, perhaps? :) When I finally took the pan out of the oven I realized the dough was still pliable and maybe I could just cut them into triangular scone shapes. And that's when I remembered the terrific large pumpkin cookie cutter I had. I immediately cut out the pumpkin shapes and left them on the rack to cool completely and firm up. 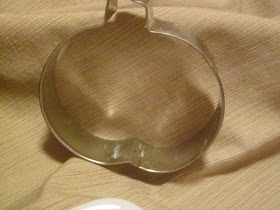 Brian and I stood in the kitchen and ate the leftover scraps from the cutter, deciding the recipe was very tasty. Once the newly formed pumpkin shaped scones cooled, I glazed them and brewed a big pot of tea. So, not exactly what I intended but a happy accident nonetheless. 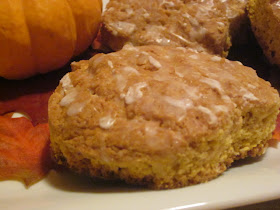 I'll still need to tweak my scone recipe to make dough that can be rolled out but this version will remain in my repertoire because it's very delicious. Enjoy!

In a large bowl, combine the flour, sugar, baking powder, salt and cinnamon. Cut in the butter using a food processor or pastry cutter until the mixture resembles course crumbs. In a separate bowl, combine the pumpkin puree, vanilla, egg and half & half. Add the wet ingredients into the butter/flour mixture and mix until incorporated.

Spoon free-form scones onto a baking sheet lined with parchment paper and bake in a pre-heated 350 degree oven for 45-50 minutes or until lightly golden brown.

When done, remove from the oven and cut out pumpkin shapes with a cutter while the scones are still warm. Allow to cool completely.

Mix together the glaze ingredients and spoon over cooled scones. Makes approximately 6 giant or 8 medium scones.