Lychee Martini (aka The Rapture-tini) 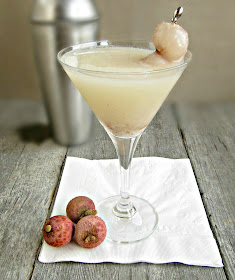 It occurred to me, as we were mixing up this weekend's cocktails, that if the world had ended on schedule back in May, we would not have been subjected to photos of Anthony Weiner's various... um... parts. Or forced to endure any of the other subsequent political scandals, for that matter. But, the upside of the doomsday delay is that we can continue to enjoy the cocktails we experimented with that night.

Lychees are a small, ultra sweet summer fruit that are also available canned year-round. We like this mixed cocktail recipe but you can also make a more classic vodka martini with a touch of vermouth and the fresh lychee puree. It will be stronger but still tasty. 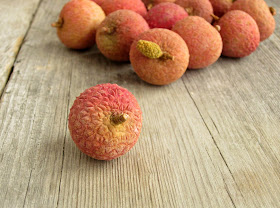 There are lychee liqueurs and lychee juices available but I think the tastiest way is the simplest. I just peel, pit and puree fresh lychees. They're so juicy that you don't need to add liquid and it will take about 2 to 3 lychees to make an ounce of puree. If you do use the canned variety, don't include the sugar syrup they're packed in because it will just dilute the taste. Cheers!

Shake over ice and serve in a chilled cocktail glass. Garnish with a fresh lychee.